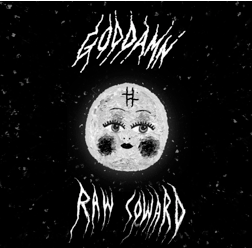 Thomas Edwards, chitarra e voce di God Damn, afferma: “We weren’t overly self-aware of making a record which in the end made for something purer. Having not long made a record with Sylvia I felt like she gave me all the tools I needed to engineer and produce the band myself, she taught me that the best tools you have are the ones in front of you and how to get the most out of them, pretty hilarious coming from a woman with the largest microphone collection in the world but I think that gave me even more confidence to do away with all the dick swinging gear wankery elitism.The guitars were done at home, you can year my creaking conservatory in the wind or the sound of my kids playing in the background on some tracks, I snagged time where I could but mostly those parts were done at 3am. Due to restrictions it was obviously hard to get together as a whole band so I sent tracks to Hannah and Rob to do at his lockup in Sheffield, I’d get FaceTime synth chats with them in some weed induced obsession over the songs, they gave it that psych depth and sprinkle of prog, it was actually a really exciting way of doing things, they were totally egging me on with the more ridiculous and dark lyrics, we had a laugh and super in-depth conversations about it all. It felt honest, visceral and joyous to be bringing those two into the equation for this record, despite the times, the human connection and love was there, it felt like us mates were pulling ourselves through with this, a coping mechanism if you will. We had a blast.”