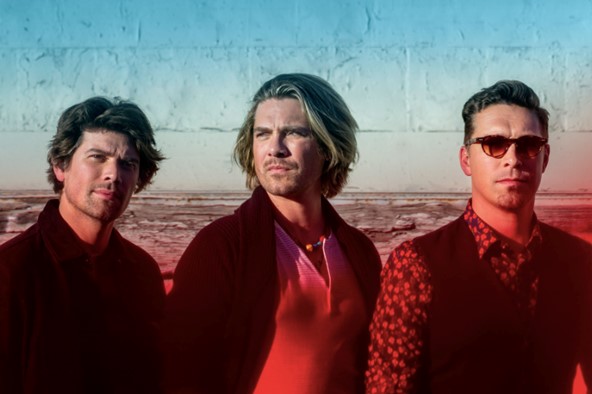 On the occasion of the release of the album “Red Green Blue” (3CG Records), which celebrates the band’s 30 year career, I had the pleasure of interviewing Zac Hanson.

Hanson are a three-time multi-platinum, three-time Grammy-nominated pop-rock trio, with over 16 million albums sold worldwide and concerts by over 3 million fans.

Hi Zac, welcome to Tuttorock, first of all, why did you decide to divide this new album into 3 parts, each one edited by each of you?

We spent a long time without dividing. And it’s a starting point because I think, especially in the beginning, when we entered the scene, you see the world trying to divide what you have created. We wanted to establish sound and unity and in this moment, I think three decades after our foundation, we are really more interested in telling unique stories and revealing more by inviting people into the Hanson world. And by sharing this record, not only did we have new creative challenges, but we told an interesting story about who we are, not just what you feel. Because here you feel the different styles, the different abilities of each brother, but also that as a band we still choose to do it together. We can still say “I want to do it with you, I want to do it for you”. And I think that says something about the spirit of the music we write and the history of our band. And hopefully people can enjoy the adventure.

I like very much the whole album but I have to say you that “Where I Belong” is one of my favourite track of this album.

Thank you. Almost every song on the blue portion was written kind of immediately before the the recording. But that one is a song that had been sitting around. I’d written a lot of the melody and not finished it, and it just felt like it was a song that needed a special place, you know? It needed the kind of project where you don’t want to put a song that feels special somewhere where no one will hear it. And this this felt like a moment was like, oh, this is an important moment to say something. And then to be right at the end of this project was also kind of gave it a special place.

In “Don’t Let Me Down” there is a collaboration with Zach Myers of The Fairwell, why did you call him?

I’ve known Zach for a while, he knows all the guys. Isaac and Taylor had just come to the end of a tour and he said he was a fan of the band, and so we ended up meeting, their band is great. And when he called me at Christmas, I was on a training bike and he asked me: “How can I do something with you?” It was a fun thing where we talked about life in general and it occurred to me that that song, which I thought was over, would get better if someone like him walked in and added an epic vibe of a “rock arena” style guitar.

And it was really fun to be able to add the friendship that is in the song, you know what I mean? I like mutual support musically, not just in relationships. Zach is an amazing guitarist and when he said yes I was happy.

Jim Scott and David Garza, what do they mean to you?

Well, both Jim and David we’ve known for a really long time, with Jim, since our second record, we’ve been talking about maybe producing something and it just sort of had never worked out. Jim has so much experience and has produced so many records that we grew up on. This was the right time to work with him and it brought that sense of confidence and completion to the process. Not only was it going to sound good, but he was going to kind of bring with it that sense of like anything is possible. He’s done a million amazing records. David was sort of similar, but maybe in a different space because his musicianship as a player was so great. We all thought it would be great to add a great guitarist to the room, being able to translate those ideas was truly invaluable. And he is someone with a great song sense of who is a great songwriter. He managed to fill in the gaps of the three of us. David and Jim were able to come in and somehow support each brother’s ideas.

Do you realize that you are the youngest musicians to have reached 30 years of career?

That’s interesting. Oh, my God (he laughs – editor’s note). No, I did not think about that until now. I’ve always loved being the youngest in the room because it meant you had so much time ahead of you. It’s crazy. It’s a very special thing to still be able to do this and still enjoy it and still find ways to challenge ourselves to make it feel fresh, like there’s still something new. And so, yeah, it’s invaluable.

Is it good or bad in your opinion to have a huge success as a child?

Well, what do I think? I think it is fundamentally good. I think it is more good than bad to to be doing something that you’re interested in when you are young. So as a musician, right? That’s something that takes years and years ato feel like you have mastered it. And so my advice to people is always to start young. Yes, there are risks, I mean, obviously there are a business like the entertainment business can sort of tear you up and spit you out and judge you in ways that sort of destroy your self image. And so that’s a danger but honestly, I don’t think that it is a whole lot more dangerous when you’re young than when you’re old. In some senses I think in my case, being very young meant that some of the things that would get you off track, some of the kind of sex, drugs and rock and roll was not made available to me, which helped me kind of figure out who I was in fame before I added to fame and Rock Star. You know, you’re just not interested in sex and drugs when you’re 11 years old.  And so I think that became a good thing.

I think, you know, one thing about us is always writing that stuff is something that maybe is a secret weapon. It’s like a secret protection because not only do you feel kind of attached to the success, not externally, it’s not other people making you successful. Like the thing that people are listening to that are singing back is something you labored over. You create it. But also there’s an interesting thing, I think. That we experience as a fan, listening to a song you love, it’s like somebody put those perfect words for you to sing back to process as the thing you’re going through. And as a musician, if you get to do that for yourself, if you’re able to find those words and tell that story, it is a form of therapy.

30 years of career that you will also celebrate with a tour. Can you tell me something about it?

What can I say? 30 years of career, you know, we are incredibly proud of everything we have done. We keep asking ourselves, will the songs we write still like it? This is all great, it’s a great testament to what we hope to create, and that gives us longevity. The songs live beyond their moment. We’ve all had a terrible two years and can’t wait to get our last two albums in front of our fans.

Thank you very much for your time!

Thank you Marco, see you in Italy!

sea:side – Riot as a game