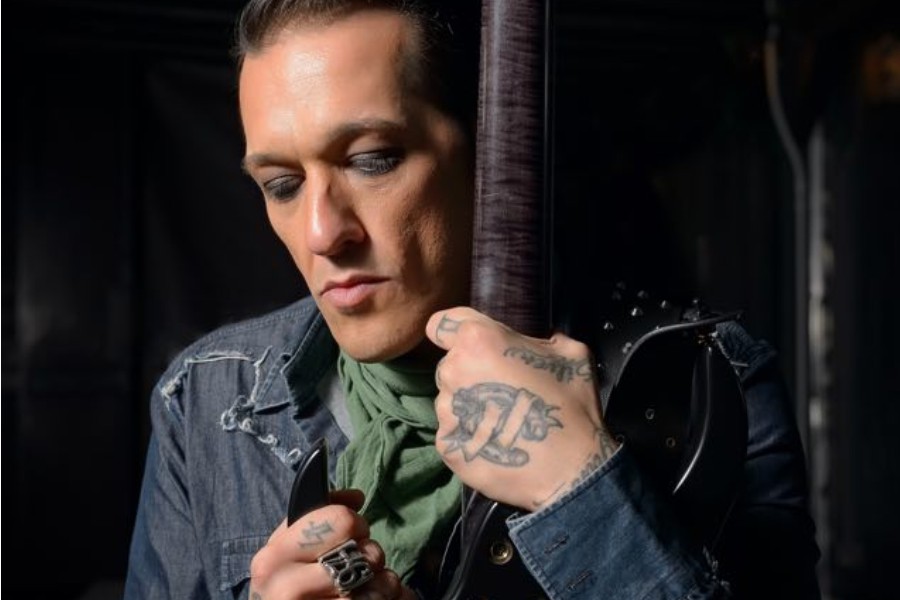 Hi Thomas, welcome by the webzine Tuttorock, first of all how your first solo record “The Gospel According to Thomas” is going?
Hi and thanks for having me. Well, its different times for me compared to when i was in my former band. Back then people still bought CDs and there was no such thing as Spotify. So of course because of that the album sales was a lot bigger back then. I guess for all bands and artists this is the same situation. These days we all focus on Vinyl and of course also Spotify. The Gospel According to Thomas is also available on CD but it hasn’t sold any extreme numbers. The vinyl sales has been good, the first print was sold out pretty fast and we made another pressing. There is a few left to buy at Rockhouse.se. It is available in gold or purple vinyl. Very cool. But i did not make this album with any other intention then that i just needed to do it for my own sake. I did not care if it sold 2 copies or 2000. I did this for me. I am still pretty tired of the whole music business thing.

In this album you talk about your life after Hardcore Superstar, so, from 2008 to today, what is the track you feel most attached to in this last episode and which one of the era of the band you founded in 1997?
It’s a difficult question to answer for me. I like them all. Caught Between Worlds sums it up pretty good. If you are referring to which HCSS song i like the best, it is just as difficult to answer. I like the two last albums i did with the band the most but all albums have some great songs. It’s hard to name just one.  Its like saying who is your favorite child. I love them all.

How long have you lived in Italy and how convincing was Daniele Petri, your current bassist, for your transfer?
I have now lived hear almost exactly one year and Daniele Petri is the major reason i came here. It was originally only for a few weeks that I should be here but it’s so damn hard to say goodbye to Italians. It takes forever. So i ended up getting an apartment here. My girlfriend came shortly after and we really enjoy living here. After a little time i got some awesome friends here, fantastic endorsements and of course my entire band is Italian. Luca Montegiove on guitar and Luca Cetroni on the drums. The guys from RedSeven amps are building me the most amazing amplifiers and they have really become fantastic friends to me. Also the genius Luigi Valenti, who builds my guitars is an incredibly good friend. Tuoro sul Trasimeno is a very small place and in the winter its like a zombie town. But i like it.

Do you miss the Hardcore Superstar period and the other members of that band or are you happy with your choice?
I am still happy with my choice. Certainly there is moments when i miss the guys a lot but we still stay in touch pretty often. I am still waiting to get that opening spot for some gigs. We have talked about it a little and i hope it will happen. I thinks some fans would like that line up. Thomas Silver opening up for Hardcore Superstar, sounds like a nice bill. Funny thing is that its probably Vic Zino, or Vic Stronzino as i call him, i have most contact with. Of course also Adde. He is still half my brain. We had a musical connection i don’t think i will ever have again.

You played in concerts around the world in front of many people, now you play in small clubs around Italy, do you feel undervalued for this or you don’t care?
Sometimes i get reminded of the fact that i have played Stadio Delle Alpi in Turin and all those big venues. But to be completely honest, when playing in front if that big of an audience you get no real connection. Its to far from the stage to the crowd sometimes. I like performing in all sorts of places. Even the very small ones. I have almost not a single memory from those huge shows but i will always remember when HCSS played a small club in Germany in front of three people and a dog.

What difference did you find in working in music in Sweden and doing it in Italy?
I feel that Sweden is a bit boring. At least for me,at the moment. They have not cared so much about my release. Hard to get gigs. I guess i have to grow a beard and wear bellbottoms maybe. Hahaha. Sweden is following trends and are sticking with the old at the same time. At the moment its a kind of a 70 hard rock revival. Tons of bands like that in Sweden. One person in Sweden, who i was speaking to about a gig at his club said regarding my Facebook artist page; You don’t have so many followers! I answered that Jesus only needed 12! That is Sweden for you. Hahaha

Please tell me a little about your future plans.
I don’t really know how the future looks. I think i will make another album, maybe here in Italy, i don’t know. For now we are playing as much as we can. There might be a 4 song maxi vinyl in the near future. With two acoustic songs and two brand new songs. Stay tuned for that. Maybe we will move to a bigger city, like Perugia or hopefully Firenze. I have many friends in Firenze and its not so far from here. Right now i have no plans to move back to Sweden. But if my girlfriend wants to move i will also move. She has followed me everywhere and giving up stuff in her life for that, so its about time i do the same for her. She is my everything.

Thank you very much for this interview, do you want to say something to the Tuttorock webzine readers?
Thanks for having me in Tuttorock webzine and hope to meet you all very soon. Also, don’t believe the hype!