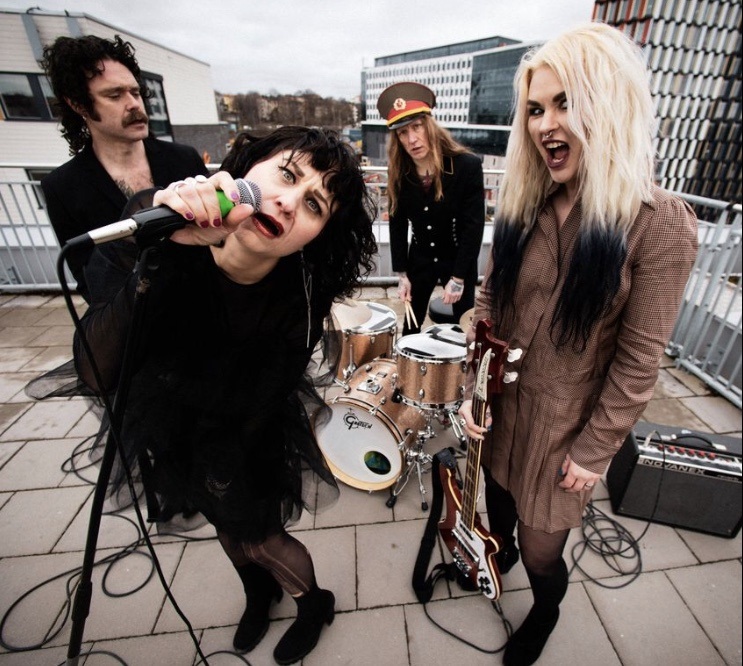 On the occasion of the release of the new single “I Never Say Goodnight”, I had a chat on Skype with Cecilia Boström, singer of The Baboon Show, Swedish punk rock band active since 2003, included in the Bay Fest 2021 line up, a music festival that will take place on August of next year in Bellaria Igea Marina in Italy.

Hi Cecilia, welcome on the pages of Tuttorock, first of all, how are you?

Hi Marco, nice to meet you! I’m good, I’m enjoying the summer, due the Coronavirus there are no shows on these months, so I’m trying to spend as much time as I can with my husband and my kids in my house. And yeah, I enjoy having time off basically and summer is perfect for this.

One question about Coronavirus, what do you think about the idea of Sweden that did not immediately close everything as for example Italy did?

I guess I don’t really have an opinion about it because I am not a doctor or a scientist about virus contagion. So I guess I don’t know better than other people who decided what we should have done or not should have done but I think in my not professional ways that in Sweden where we didn’t close everything, I say that’s a better idea than to close everything, because if you close everything, then you have to keep everything closed till there’s a vaccine and then that’s pretty much what happened in the other countries. I think that if you first check everything down and then open up things slowly without the vaccine, then the number of sick people will grow again. So I think that the Swedish way is kind of a reasonable way to handle it, although in Sweden don’t live many people as for example in Italy or in Germany or Spain. We are only about 10 million people and that’s not many, and the Swedish way is to keep distance. I don’t know if you met Swedish people, but we are private people, I would say in general, we don’t kiss each other on the cheek and we avoid to close to one another and we’re kind of experts in keeping distance so I guess for us, it’s not that hard to maintain the social distance. Every country handles the virus in their own way and what’s better and what’s not as good is something we only will know in the future. If you’re not a scientist or a doctor you can have an opinion about it but I don’t really see the point of discussing it because it’s like if you don’t know what you’re really talking about and no one knows what will happen. We must to keep distance and don’t see too many people, I mean, of course, everyone of us has to take responsibility.

Let’s talk a little about “I Never Say Goodnight”, your new single, how was the song born?

From the beginning when we write songs usually one of us has an idea for the melody of the song and then we try to work on, if we like the song or the idea of the song, then we work with it together in the rehearsal room and make the arrangement together and after that, we write the lyrics. This time I wrote the lyrics, it was written quite long ago, so I don’t remember exactly how we came to the sound but we wanted it to sound like a little bit like a power ballad like the 80s. It sounds somehow like Scorpions.

We never really did that and we think it’s fun and challenging to try new stuff and not always do the follow the same recipe as we did before. I mean, we tried things like disco influences and funk influences and stuff like that and now we felt like we wanted to try to make something like not really a ballad, but something with a more powerful sound.

And the result is a very good experiment.

Thank you so much!

This single will be included in an EP, when will it be released?

Yes, it will be released 11th of December, from the beginning we were planning to release a complete album at the middle of November but then, yeah, we changed the plans due to the virus because it doesn’t really make sense to release a whole album when we can’t playing live but at the same time we felt like we didn’t want to keep everything tail end of next year because that’s so long and since we already started the recording process and everything, we decided that, ok, let’s release some new stuff and then we keep the rest for the album. And that will be released next year depending on the situation of course, but that’s the plan and let’s see if we can follow it through. When you record something new, part of the process is also to release it and see the reaction of the audience, etc.. So it feels very good that we did decided to do this way so we can release some stuff now instead of waiting a year or more than a year for a complete album.

The Baboon Show were born in 2003, how did you meet and who had the idea of the name of the band?

Niclas, Håkan and I met through a common friend, they pretty much grew up together in the north of Sweden. So they know each other since they were young but I met them in Stockholm after they moved there. And I guess the first time I met him he has already had his own studio where we recorded with small bands. I had this riot girl band together with two friends, and we recorded an EP but then I met Niclas just before and through a common friend and yeah, I guessed: “he like my voice”. He really wanted to play more pop music in their band and they wanted to do something a little bit more fun and fast and aggressive. Then he thought that my voice was really great so he asked if I wanted to start a band with him then, and yeah, it sounded fun. When we were thinking about names, we saw that we wanted a band name that was not so cool. Everybody’s always searching for something that sounded really cool and instead we thought it was good to have something that people will remember and that is maybe a little bit odd instead of sounding super cool. And then we were thinking about the government in Sweden, and there was a test, I think, about the stock market where they just like putting in a monkey randomly who could put bets on different obligations and the monkey did as good as this stockbroker. And so then we thought that it’s like both at the stock market and in the government where there’s lots of people with no idea about anything, really, it’s like a monkey show. So we thought that, yeah, we can call ourselves “The Baboon Show”, that was the idea.

17 years always on tour together, two men and two women, did you always get along?

Of course we fight (She laughs – Editor’s note). We are like a family basically so I would say that we are like siblings, I mean, brothers and sisters. And sometimes we disagree about things. I would say that most of the time we agree and we get along, but it’s like always when you have people very close to you and  sometimes you get annoyed about different things, then you can’t really say why. It’s just because they are close to you, I guess so we fight, but it’s never a real fight. It can be serious, but it’s just a normal family disagreement. I mean, we all love each other so we are the best of friends even if we fight sometimes.

How much do you miss playing live?

I try not to think too much about it, because then I would miss it more, it’s a part of who I am. And so, of course, I miss it a lot, but I don’t think about it and I don’t miss it super much because it’s also nice to just be at home and stay put, then focus on the things that are at home instead of, you know, flying around, sleeping in hotels and it turned day and night around. I miss it of course, I would lie if I said that I didn’t miss it, but it works.

Is there a place where you’ve never been and where would you like to play?

Yeah, I guess it would be nice to go to places like Brazil or South America yo play, that would be an adventure I think, we would also be interesting to play in Russia and the ex Soviet Union, that’s a place where I’ve never been. There’s a lot of places where we did play, but there’s definitely a lot of places that we don’t know still. And I mean, to play more generally would be great, also, we only did a couple of shows in Italy.

We can live by the music and we get to meet a lot of people, see different places, so I’m definitely happy with how things go but at the same time, we are a political band. I mean, we play folk music and we’re not afraid to speak our mind, which is not always comfortable to everyone. So I guess if you want to be like a superstar, you should not play punk rock music and I get I mean, we can change that, but we’re not going to change that. We got we are I mean, we have opinions and we stand for our opinions and we’re not going to shut our mouth about it, that’s what I mean, that’s what we write about in our songs, that’s the essence of our band somehow. So we cannot be too commercial because we just don’t have a commercial message and so I’m very happy with how things go and I think we all are.

You will perform at the Bay Fest 2021 in Italy, on the beach, with bands like Sum 41, Bad Religion, Flogging Molly. What show do you have in mind to do and what do you expect from that live?

We didn’t plan nothing so far, a year is a long period. I mean, it’s almost a year till this show and we have released some new songs, so we’re definitely going to play songs from our EP and we have no shows now, we have more time in the rehearsal room, etc. So I guess we’re going to prepare a whole new show but we need a plan so I cannot say much about it. But if you saw us before, you can expect something new in the sense of an updated show.

Thank you very much, do you want to say something to the readers of this interview, to your fans and who will come to see you at the Bay Fest in Italy?

I can’t wait to see everyone!  I really long to be on stage of it again and interact with our beautiful fans and crowd. That’s something I really long for and I think that the audience also will be very excited when can start going to concerts again. So I’m pretty sure it’s going to be just great super for everyone.