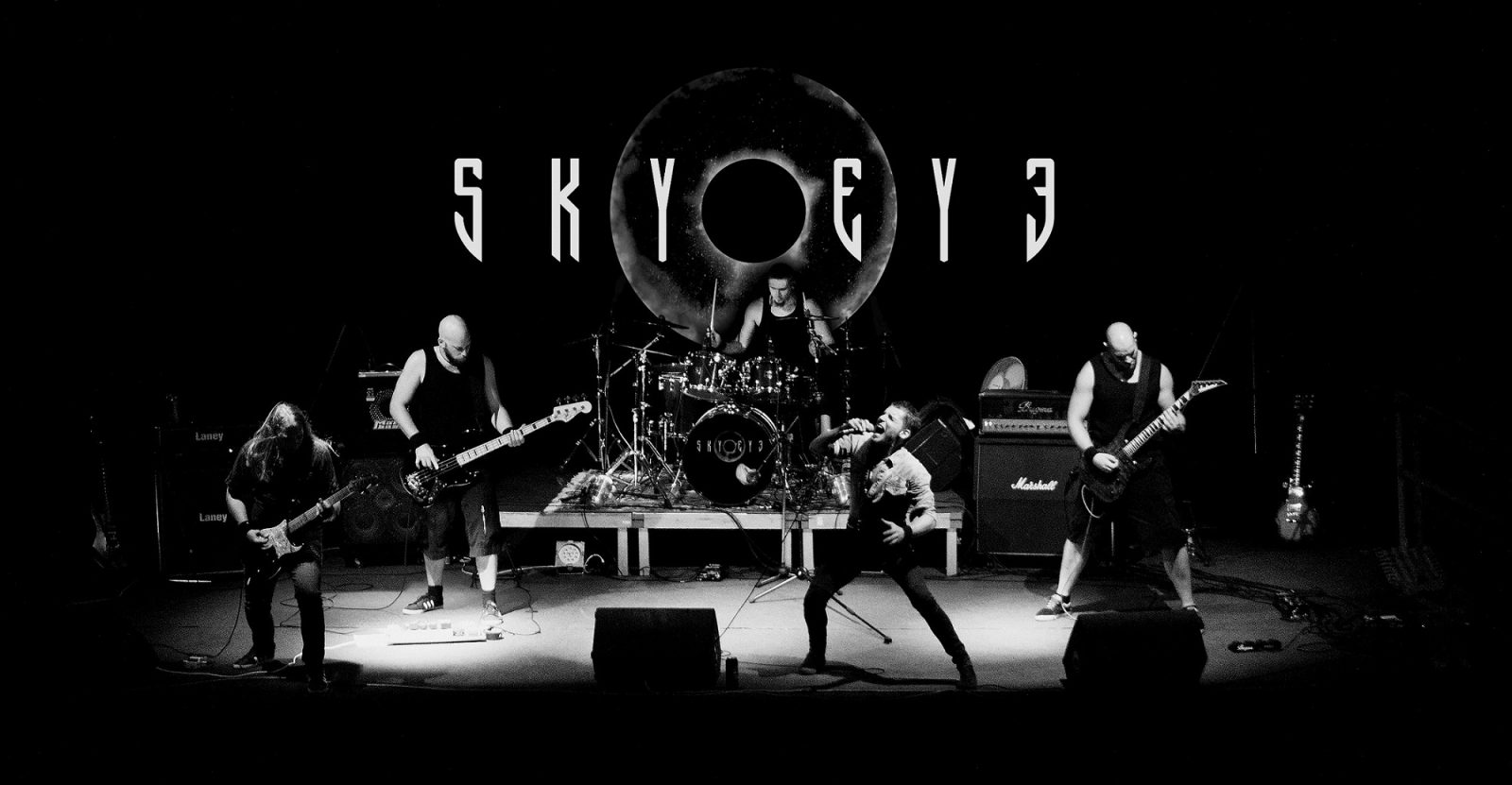 On the occasion of the release of their second album, “Soldiers Of Light”, scheduled for Friday 25 June on Reaper Entertainment label, I had the pleasure of interviewing the Slovenian heavy metal band SkyEye, founded in 2014 by guitarist Grega Stalowsky, bassist Primož Lovšin and the singer Jan Leščanec. SkyEye reached their current line-up in 2016 when guitarist Marko Kavčnik and drummer Jurij Nograšek joined the band. Unique and powerful voices combined with direct and melodic guitar riffs give the band its distinctive heavy metal sound, reminiscent of other important representatives of the genre, such as Iron Maiden, Saxon or Judas Priest. The band made its debut in June 2017, and just four months later released their first EP titled ‘Run for Your Life’. SkyEye returned to the studio to record their debut album ‘Digital God’, released on November 9, 2018.

Hi guys, welcome to Tuttorock, how are you?

Thank you for having us. We are great because there is finally a light at the end of the “corona” tunnel and because we will release our second album very soon.

Your second studio album “Soldiers Of Light” will be released on June 25, 2021 on Reaper Entertainment label, when did you write the songs?

Jan and Grega started to write material for the Soldiers of Light album even before the first album was released. So it took us the whole year of 2019 to rehearse and to play through the new material, because we like to work in the old fashion way – together in our practice room, full blast on.

How does a Skyeye song usually come about?

Both albums were written mainly by Grega Stalowsky and Jan Leščanec and all the lyrics on both were written by Jan. Because every song is its own universe there was no specific vision in our mind when we started to write new music. We just wanted to have fun while making new music. When the songs were finished we knew that we would surpass the previous album. When you have that feeling you know that you are on the right path. As far as technical details go, we used the same studio and the same equipment as before and the album was once again produced by Grega Smola Crnkovič. The main difference is that this time the mastering was made by Boban Milunović who made it sound huge and modern.

How did you manage to record the album with all the restrictions due to the pandemic?

The situation with Covid postponed the release of Soldiers of Light, as the release was first scheduled to be 26.10.2020, with the release show in Ljubljana at the Kino Šiška venue. But at the same time, we were given the chance to perform at EMFA streaming festival and that really skyrocketed our position. We caught the attention of many people, including our brilliant new manager Boban Milunovic and got a record deal with Reaper Entertainment for Soldiers of Light. So it hasn’t been just all doom and gloom for the band, although some great shows had to be postponed, such as Metaldays 2020, where we would be playing on the festival main stage.

Currently, we are waiting for live shows to return and already working on songs for the third album.

Who made the artwork and who came up with the idea?

The artwork was based upon the title song Soldiers of Light and was done by Aleksandar Živanov who is also known for his fabulous work with Metaldays festival. We just gave him the lyrics with some basic instructions and we immediately fell in love with the artwork. Very powerful and symbolic, in your face kind of a positive burst of energy.

I enjoyed the whole album, if I had to choose my favorite songs, I would say “Constellation” and “Eternal Starlight”, you, listening to the album for the first time, were you completely satisfied?

Good choice Marco 🙂 Actually there was a very long process of recording and mixing the album that took us almost the whole year of 2020 to finish. We are close friends with our producer and sound/mixing engineer Grega Smola Crnkovič and we were in touch on a daily basis. So, we were able to steer the Skyeye ship in the right direction and we are completely satisfied with the end product.

There is a song of almost 15 minutes, “Chernobyl”, why did you want to tell that event?

Jan: I was one year old when the Chernobyl disaster happened. I do not remember the event but my parents told me that we had to stay indoors for a few days and we were not allowed to eat vegetables from that period ect. I read a lot about the disaster and I was quite hooked on it. And then came the Netflix series about Chernobyl. I was watching it with my girlfriend and I was completely mesmerized by the scale of the disaster. She said that I should write a song about it. And I did. It took me almost a year to finish the song but it was all worth it.

I’ve already seen three videos on Youtube, where were they made and who is the director?

Jan is our main man behind the scene. We put ideas together and then Jan makes the end product. We shoot our videos at our practice room in our shelter in the middle of Ljubljana or at our guitarist Mare’s home.

Iron Maiden, Saxon and Judas Priest, listening to your songs, seem to be your reference bands. Are there any bands today that you particularly like?

Each of us has been listening to a different kind of music, but we all love metal, especially heavy metal and legendary bands like Iron Maiden, Judas Priest, Saxon, Deep Purple… old stuff 🙂 We love music that is deeply emotional, moving and powerful. That’s why we listen to and make heavy metal music. So yeah, I would say, that we all love the mix of heavy metal, with a little bit of a modern metal flavour from Bruce Dickinson and Blaze Bayley’s solo albums, Primal Fear, Grave Digger, Alestorm as an example to some different metal style bands like Obituary, Kataklysm, God Dethroned, Soulfly, Terror and Hatebreed.

Of the live shows you have done, is there one that has particularly remained in your mind and in your heart?

There were a few very special shows for us. The first one in 2017 in our hometown Ljubljana of course, because we know straight away that from that point on, something bright and powerful was born and it is going to change our lives. There was another show quite special to us, when we opened for Iron Maidens at Kino Šiška in 2019. We got a really good response from the audience that night.

Are you already planning a tour?

Hopefully, the world will go in the right direction and we really hope that the music industry will kick back more brutal and more powerful than ever. Like everybody, we miss live shows as well and we are looking forward to some new concert dates and opportunities. At this moment we don’t have any tour dates, or do we?! 🙂 We actually have some big news regarding a few summer festival appearances, but we are not allowed to share the news yet. We also plan to make a big concert in Slovenia in support of our new album when authorities will allow mass gatherings.

Thank you very much for your time, would you like to add something to close the interview?

We would like to thank each and everyone of you, who supported SkyEye over the years, who bought our merch, our CD-s. We are really overwhelmed by your response. With our new album, we raised the band one step higher and we hope that you will enjoy listening to our new music. See you soon at the concerts! Long live heavy metal!

SAVE THE WORLD – Two