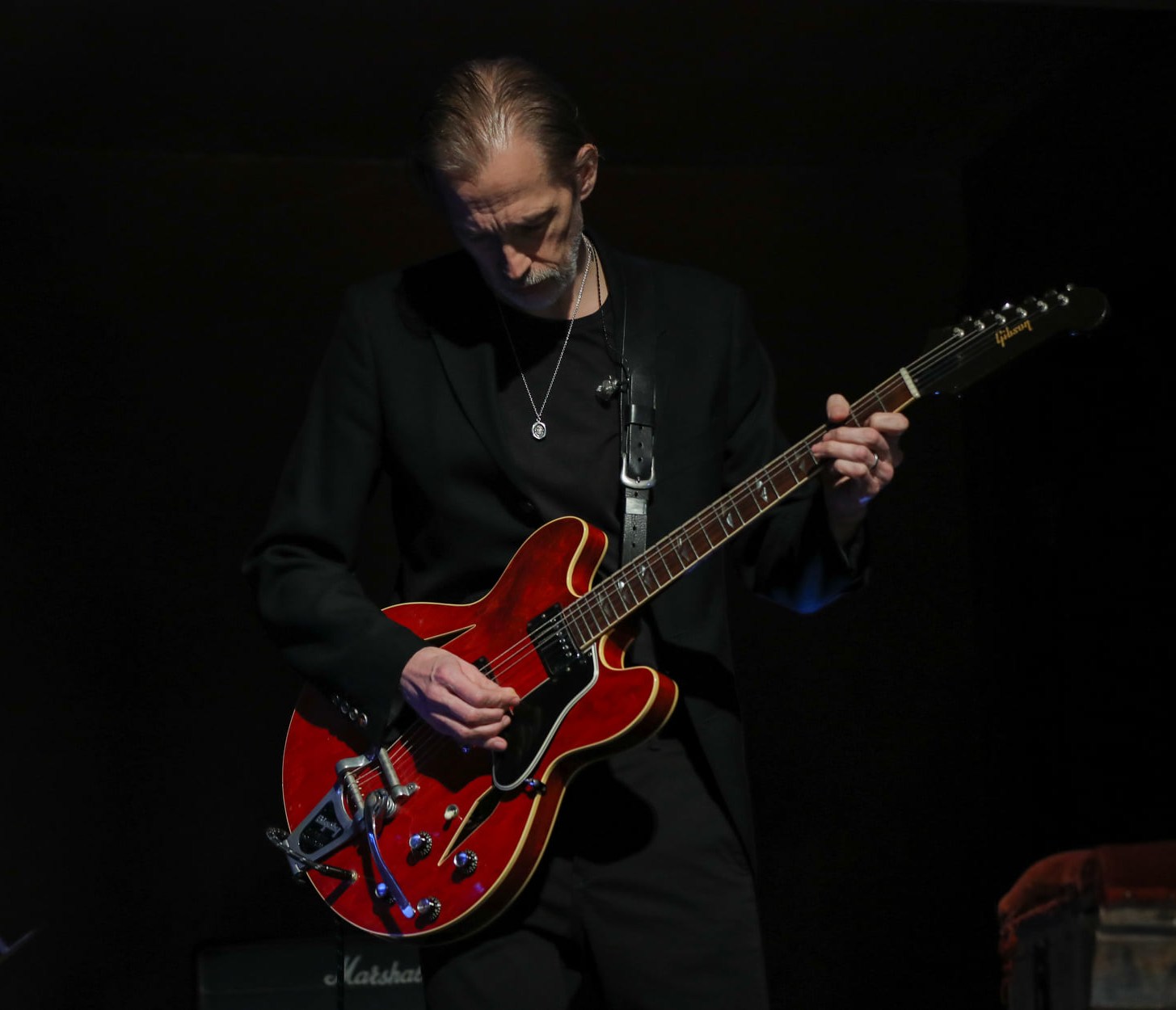 On the occasion of the instrumental show that took place at the Covo Club in Bologna within the Covo Summer 2022 review, I had the pleasure of interviewing Andy Bell, founding guitarist of Ride, bassist of Oasis from 1999 to 2009, the year of the dissolution of the band of the Gallagher brothers, and then guitarist of Beady Eye founded together with Liam, Gem Archer and Chris Sharrock.

Hi Andy, welcome to Tuttorock, how are you? About tonight’s live how did you see the audience?

Hi Marco, I’m fine thanx! We came from the airport last night and we arrived in a hotel full of Iron Maiden fans. They did us a favor because they kept the bar open. We arrived at midnight and the bar was supposed to be closed. They kept it open for us, so we were able to get a drink last night.

Yeah, I’m happy. I feel good. I feel like that it’s an experimental thing I’m doing.

I mean, it’s like a compromise, an experiment. It sometimes doesn’t work very well but tonight I felt like it kind of worked pretty good. And for the first time I played this stuff in Italy, I did feel a connection. So I hope that people can just kind of go with me on this because I’m not singing so if I don’t like a song I stop it and maybe I get like three or four songs together and then a few seconds break. I really appreciated the crowd, I thought they were good and they were very receptive.

And about your new album, “Flicker” (which I really appreciate), released on last February, what feedback are you getting?

I got great feedback about it. I was surprised because a lot of the songs come from a long, long time ago.

I kind of reached that point with the material where I can’t even hear it anymore. I don’t even know if it’s good or bad. I received some lovely reviews for the album, so I was happy to get them.

Songs born from your collaboration with Gem Archer, how did they come about?

Well, I wrote the songs in the beginning, but Gem recorded them all. He is always the person I go to to record the tracks and this started when David Bowie died. Gem and I have been best friends for many years, after Bowie’s death, we were having a cup of tea in my kitchen and I was thinking about that bad news. I think I spent a little moment with myself and the first thought was, “I feel I know David Bowie, I feel I feel his personality and his music” and, “well, if I died, someone could feel my personality through the my music? ” The answer was no, if I had always been in a band. Yes, maybe it was time to get in touch with people on a personal level and put down the parameters of what I wanted to say musically. And then when you do that, you give people perspective to see, when you’ve been in a band, what you’ve actually brought to that band. And I think that was the initial feeling. I was talking to Gem not about any of this actually, because it would have been a little too heavy, but I just said, “Could I use your studio to record some ideas?”. Luckily he agreed. So we spent a few weeks where I went to him for an hour or two in the morning to put a track down, I think I spent about a month with him doing this and we made two albums out of it.

Did you play everything in the studio?

I played drums, bass, piano, some acoustic at Gem studio and then I brought this sessions back to my laptop and I carried on everything.

As an Oasis fan, how did you react when you were called to be the bassist of the Gallagher brothers’ band?

Man, I mean, I think it was like when Ronnie Wood joined the Rolling Stones, like joining your heroes.

I think it was like a dream for you…

Yes. These guys are still my heroes, I mean, musically, I love Oasis. From the first time I listened to them, I fell in love with their music.

Getting us into the band was a privilege. Because Gem and I became close friends because we both always had that love for Oasis and we know what that generation meant to us and we loved being able to help them carry on when they were in trouble, you know, they never really were. in trouble, but it’s like they got to the point of saying, “shit, we lost two guys, we have to rebuild the band”.

They brought us in and we played in really huge concerts, it was really a privilege to be a part of it.

I had a small role, as a bass player, but that is not very important. I poured all my love for Oasis into the way of playing the bass, I squeezed a lot of love into that way of playing that instrument.

Do you agree with me that Noel is rightfully considered one of the best living songwriters but as a guitarist he is a bit underrated?

First of all, the songwriting thing. Yes, he is one of the greats, like Burt Bacharach. For a few years he was unbeatable and he could just do it like this, bang, bang, bang, bang, bang like they were just simple songs. And as a guitarist, you know, I took a lot from that guy, when I heard him play I felt like, I mean, the thing is, it all come from his character. It’s like with any really legendary great world class guitar player, singers too. Everything comes from the character of the person. You feel like you’re getting a direct line to the person. Strength, kind of consistency, accuracy, inventiveness or something I think those are some elements of his guitar playing. When I heard him playing for the first time, I could tell the influences because they’re obvious. It’s Nick McCabe, it’s John Squire, Johnny Marr. And then you kind of go back to the greats, the Beatles and stuff like that. But it’s not to denigrate him. I don’t care if people know where my influences are because they whether I wear them on my sleeve, I always I’m very transparent, like this is what I’m into. It doesn’t matter if you hear my influences because I add something to it as well. So no one was able to take the sound of Nick McCabe, John Squire, both genius guitar players, no one made that style into something really, I don’t know, like the solos, it forever like takes something that is in the air and makes it like into the ground, it’s like taking something ephemeral and makes it solid and permanent, if you know what I mean.

Liam is just as equal on his own terms, in his own way, in his own style. So that’s the great thing about the two of them because they are equals. Yeah. You can’t have Oasis without Liam. You can’t have those songs, those songs are great. And we’ve already said they’re world class, lifetime amazing songs. But having Liam as the one who delivers those songs is like something extra.

Have you ever thought about what you would do in case of an Oasis reunion?

I don’t think they’re going to call me to be part of that reunion. They’ll get their own guys that they have already. But I’m going to go to the shows.

In 2014, after the adventure with Liam Gallagher’s Beady Eye, there was the reunion of your Ride, can you promise the fans that there will be no more breakups?

No, I can’t. I can’t promise that. Is the kind of band that can fall apart anytime.

But right now, it’s good. So relax, everyone, it’s all good, we’re working on a new album, we go in the studio on and off. It’s been a bit weird with the pandemic, you know, but we are working on the music.

For me, for you, for everyone the world has gone crazy. I stayed at home to make interviews by Zoom or by Skype or focusing on my head. It has been bad.

Of the artists of today, who has impressed you the most?

I think at the moment I’m kind of listening to a lot of electronic music, and that’s where my head’s at. Yesterday I was listening to Richard Fearless from Death in Vegas mixtape. He puts out a show on Double Up, the L.A. Radio Digital radio station. I love him, I love what he does. He played a tune that was a really cool like, I thought, oh, this is like Steve Reich, some kind like stuff with marimba or piano or strings but with an electronic beat. I messaged Richard, “What’s that track you play with?” It was like a remix and then embarrassingly he messaged back and said “Oh, it was just two different tracks in the mix”. So he was mixing this minimalist old school with technology, that’s it. That’s great. It sounded like the next record I want to make so I want to use that.

I just want to add a big thank you to Ugo (Cappadonia, the artist that opened Andy Bell show – Editor’s note), this guy. He allowed me to use his equipment. Bye!